Van Leer-the-band DID NOT APPEAR anywhere 3 a.m. Jan. 1 -- event was cancelled. ~ NEXT GTA Van Leer gig is multi-band Event @ Birchmount Tavern Sun. Jan. 16th running 2 p.m. to 11 p.m. ~ VAN LEER hits the stage at 5 p.m. Other bands include The Hinges,
Scarpelli (Gino S., long-time member of Goddo) & AT LEAST 5 others. It's a charitable benefit, so there's a $10 cover charge. Big stage, big p.a. & lights, biggish menu, u r gonna love it! ~
May your 2011 be excellent. ~ Pls watch our GTA Appearances Schedule, BUT if it appears incomplete or non-current, do PLEASE return here to Lee's Blog, where we'll
ALWAYS keep u up2date on Van Leer gigs in the GTA, and any Lee Van Leer guest showcases
w/ other bands. ~ The Birchmount Tavern / Cactus Pete's is highly visible in the
Birchmount Plaza, N.E. corner of Danforth ROAD & Birchmount Ave. ~ R U Red-e turoq? Hopefully we'll see you there!
Posted by vanleer at 12:35 PM No comments:

THIS SATURDAY, VAN LEER WILL PERFORM IN PUBLIC 4THE 1st TIME SINCE JANUARY 2010, at the Alpine Hotel again on Kingston Rd., E.of Vic. Pk. This is a charitable event w/ 4
other bands, so there'll be a cover charge.~ Start time is 8p.m. ~ 4sure u wanna be there!
Posted by vanleer at 10:20 PM No comments:

Lee Van Leer and Gord "Wayne" Munzy play Lado and Jillard guitars & basses exclusively, strung with Belltone Strings, their life extended by Stringtreat. Amplification is by Peavey Electronics. ~ Pls visit: www.jillardguitars.com ~
We have no idea who makes our kazoos.
Posted by vanleer at 2:43 AM No comments:

When I was visiting Arizontal, Arizona, I was accosted by four Mexican nationals who possessed no documentation whatever. Three of my abductors looked like, uh, mid-30s male hispanics. The fourth was completely covered in curly, off-white fur, and she BLEATED. The three males lifted me and loaded me into a white Ford van with a cereal box where the rear license plate should have been. Their apparent leader asked of me many questions in heavily accented English, including if I knew the location of a peyote cactus. When I replied that I did not, my interrogator became very agitated
and smashed a plate of poutine into my face. ~ 2B continued.
Posted by vanleer at 2:11 PM No comments:

Did you ever see/hear The Soul Instigators?

No?, well the day will come again in early 2012. ~ Pete Aube', Scott Sharp, (or John W.),
Mike Murphy<---(optional), Lee Van Leer and importantly, Wayne Munzy, bassist. Keep watching or following this Blog for more news. Meanwhile pls view PICS on my 2911-01-17 post. Be safe. Be well, my friends & fans, and thank you! for viewing and/or Following this Blog.
Posted by vanleer at 11:22 AM No comments:

Labels: doesn't it?, it makes YOU wonder, Ooh

Proud of the logo that I designed. Proud of the music we made when we were 4 & 5-pc. ~ Dear friend Andy Ray Fong was occas. 5th member, like on "Crossroads" -- Please listen. You WILL enjoy! Can Lee Van Leer design band logos? [see also VanLeer & Trill] Does Bigfoot rule the woods? ...
Posted by vanleer at 10:03 PM No comments:

... that Toronto, ON, ca municipal election enjoyed a 50% voter turnout, the largest
in the 10 yrs. of the Amalgamuddle (TM Appl. For).
... that longtime Councillor Sandra Bussin was soundly turfed out on her rump & repl.by Mary-Margaret McMahon, who facially resembles somone I used2 see on SNL
or somesuch. She'll hopefully teach Mayor-elect Rob Ford to be greener. It'll be fun 2 watch. ~ I'm NOT delighted that Frances Nunziata is still in office.
I'm delighted that my Councillor is still Adrian Heaps. ~ 'nuf politix. ~ I'm delighted...
Posted by vanleer at 9:39 PM No comments:

Labels: ...like the firefly who backed into the fan. 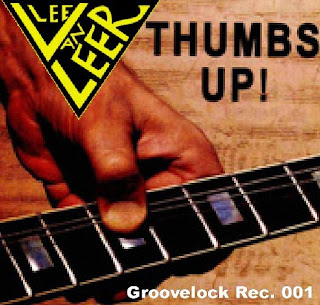 And now, an Ad for 2 fine musical products:

Stringtreat, the best instrument string life-extender yet, and Belltone Strings, which I now use instead of my longtime fave GHS Boomers & my "backup" Dean Markley's.
Please visit www.belltonestrings.com & chk it all out incl. links to, and through,
Haley's Strings. It's as good as the tunes on this (VanLeer) website. (Pls xcuse blatant self-promotion, LOL! I AM proud of our "Thumbs Up!" CD.) ~ Watch for news
of way cool charity benefit shows at a BIG venue in Mississauga.
Posted by vanleer at 10:58 AM No comments:

...Ford Fiasco annd a Chevy Charade!
Posted by vanleer at 8:00 PM No comments:

U may call me Sherwood...

...bcuz I "Sherwood" like to hear from Lisa Ehrlich!
Posted by vanleer at 2:47 PM No comments:

A BALL THAT ROLLS NOISILY!
Posted by vanleer at 9:34 AM No comments:

Daisy Bain & the Epaulets w/ V. Spl. Guests Shredded Flag and Lee Van Leer w/ Jimmy Cannon, drums - Some Young Guy, bass & gtr. and Russell Drone on gtr. ~ Gallons of Limeade, alcoholic and non-, + plenty of chicken! Fireworks when darkness fell. All in all, a most memorable day.
Posted by vanleer at 1:34 PM No comments:

Q.: "Hu" would win a fight between a PLANIPLOTINIPS and a TRIMMAZORBITUS if '80s Detroit
rock were the referee? A.: The fight ended prematurely with a portion of the Livingston house collapsing on both combatants. ~ Brush Park ruins 1, obscure species 0.
Posted by vanleer at 11:22 AM No comments:

May 2 matinee at The Ice House was awesome!

Totally fun! Bick Bazilian & the Flap gave 115% -- Rick's voice is a cross betw' Paul
Rodgers & Eddie Vedder. I stood riveted near a p.a. spkr. stack for the 1 hr. set,
entranced. When an encore was demanded, Rick picked up a Les Paul & yelled, "a tribute to Lee Van Leer!" and proceeded to almost shred using my thumb lead technique. Huh? I didn't even know that Rick played lead! He plays acous. rhythm on
1 or 2 songs in their set. Wao! ~ Well, the gauntlet had been thrown in a friendly manner, so luckily I was able to borrow the SG/Les Paul Jr. from Shredded Flag with
which I'm so comfortable, and let loose w/ "Bruised Apple Pie" and Jeff Beck's "Free-
way Jam" at the end of my set. The audience roared -- They hadn't seen me, on gtr. or otherwise, since Summer '09. Having the b.u. vocal ladies was a huge plus, also,
on tunes like "A Love To Last A Lifetime Long." I'm still radiating enthusiasm. The
crowd was over 200, Bill said, so everyone was content. I think the next show is planned for late June. I'm stoked!
Posted by vanleer at 3:43 PM No comments:

I'm lkg. 4ward 2it, tho' 1st 2 wks.= chronic pain, but apparently not a baaad kind of
pain. I'll be in hosp. for 8 to 10 days, I've been assured. I like that better than the 5 days that they often turf u out after! Typical recuperation period is 6 wks., after which the patient can usually drive cars & do quite a few other "normal-type"
things. I wonder when I'll be able to stop using my cane! ~ By Mar. 19 I HOPE to be able to resume gigging with The Muddy Guys and the seldom-seen Van Leer (band). I DO
KNOW that during the recupe' period I am warned against long periods of SITTING,
therefore no rehearsals and no computer "marathons". ~ Next post wont be 'til Feb. 16
or later, my frieds, so BE WELL. LVL
Posted by vanleer at 6:58 PM No comments:

We had advt. this event as a "The Muddy Guys" gig, but due to circumstanza beyond my (LVL) control, we instead hastily assembled a variant of VanLeertheband which included Rick Lintlop (ex New Regime bassist), drums ~ impressive, melodic Grant
Crawford on gtr. ~ bassists were Peter Benn & Alex A ~ Peter also sang & played rhythm gtr. (and one nice lead!) We vocalists were in FINE voice, and we did one long set of "classics" and originals, then a short set feat. Peter's lead vocals near-exclusively w/ Alex A on bass. Everything gelled SUPERBLY and we won some new
fans who bought LVL "Thumbs Up!" CDs. ~ All musicians present including Ryan L., Joe, "big" Eric, 2nd set drummer Al, and others not named here were MOST helpful w.
set-up, tear-down and sound reinforcement. Thanks SO MUCH, guys! ~ I was invited to stay for Mrs. L's birthday party, to be fed & hear 2 great bands (one of them college-age)but a red fruit drink I started to ingest after Set 2 set my hernia off into Severe Pain mode so I left, personal gear & all with my friends Pete Aube' &
son "Scott Sharp" who refused to accept expense money that I offered. ~ Some of my
friends frequently spoil me 4sure, LOL! ~ Spl. thanks to my dear Sa---, who sent 5
of the "new fans" my way. BTW, my pain subsided by 9:45 and I was able to "resume
normal life". ~ I'm posting this entry from Oakville ON where I'm visiting family -- always a pleasure.
Posted by vanleer at 10:25 AM No comments: