A Race Of Giants

And lo, there came upon the Earth from a distant galaxy a race of giants known as the Nephilim, who invented both the t-shirt and the tank top, also the knitting machine, for the Nephilim thought that cotton was cool, and also
comfortable. The Nephilim had only three surnames, one of which was Buick,
and the other two were guttural and quite difficult for humans to pronounce. Humans adopted the surname Buick, which exists to this day as Buick or La Buick. After reducing the edible vegetation of their adopted
region of the Earth to waay short supply, the Nephilim boarded their streamlined craft and left our planet. They have left us, though, with three pearls of wisdom: 1) the peanut is not a nut, but actually a bean. 2) Strawberries are not true berries. 3) "Building pyramids is easy!" This latter
may be true if your race's average height is eight feet and you have extremely advanced technology at your disposal. Some believe that the Nephilim will return to Earth someday, but the majority of UFOlogists say, "Not bloody likely!"
Posted by vanleer at 5:11 PM No comments:

A bunch of us attended Jon Long's B'day party @ the Black Swan & it was FINE FUN. Apparently it started around 1 p.m. We landed just B4 9 p.m. Heard Cathy Young, still in full, fine voice. Re-connected w/ Lyn Mantle, whose at last getting back into gigging. I hope we see much more of her on
local stages. Many bands played -- short sets of 4-5 tunes. One "guitar virtuoso" power trio got up & did ONE blazing instrumental, thanked the audience and stepped down. Duh, gawrsh, Mickey! ~ Only vocal harmony I
heard all evg. was from a trio doing Bob Marley reggae. The drummer was the 2nd voice. I didn't catch their name but they were GOOD! ~ My vote for strangest food fight would be: Sherri & I SPITTING CHICK PEAS at one another. Yes, my darling was... intoxicated! And I was just in High Silliness
mode. ~ Unanswered Question of the week: Back when he was plain ol'
John Feeny, did Lee Van Leer play on the Feral Katz album? I'm told that this gem fetches around $200 USD per copy in v. good condition. I'll bet that YOU
don't have a copy -- I don't! ~ Attached jpg: two tens and a horn: that'll 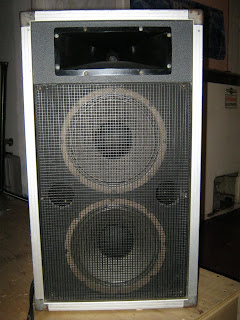 ...will commence during the 2nd 1/2 of June 2013. I'm even selling my Peavey
Bass Mk. III amp head to help cover costs ~ Price: $175. It has an over-long
A.C. cord w/ a HD 3-prong plug.  Orig. owned by Troy Sinister when he was still playing bass, it still has a "The Sinisters" stencil AND a "Lee Van Leer"
stencil on the top. 105W RMS into 4 ohms. It duznt mind a 3 ohm load or a 2.6 ohm load, but 2
ohms is NOT recommended, say the Peavey experts @ Steve's Music.  These
heads are quite versatile, w/ even a biamp capability! 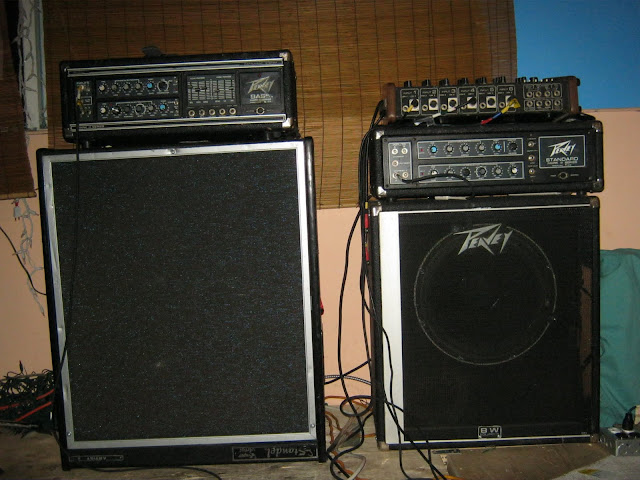 It's the one on the left. ~ The other gear in the photo is absolutely NOT for
sale as it's used in a rehearsal room, AND my kbd.-playing granddaughter might want it someday!
Posted by vanleer at 7:21 PM No comments:

Pls chk Craigslist Toronto ad #3719684160 for PLENTY of details, dimensions,etc. ~ Thank you!  ~ BTW, a Peavey Bass Mk. III amp
head is also for sale. Please see the post above this one, thank you.